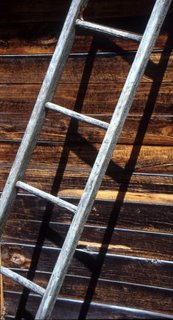 I asked him in a follow-up email if he ever saw himself coming back to New Zealand and - before predictable talk about how if he had children he would want to raise them here - he wrote that his time in New York had been mostly hard work, struggling to survive and get ahead.

"But of course, now that everything is in place I think about changing it all again by moving somewhere else. I guess that's the nature of attainment - it's not until you get to the top of the ladder that you wonder if it's propped against the right wall." 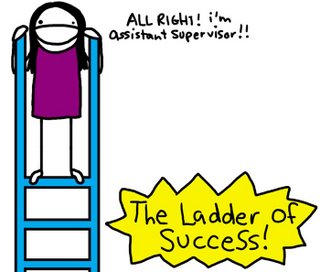 Not sure where this cartoon comes from - will acknowledge if I can find out - but it's making the same point.
Posted by Nigel Pollock at 1:45 AM 18 comments:

New advertising campaign in print and television is trying to address attitudes to alcohol in New Zealand. The theme is "It's not the drinking - it's how we are drinking" and seeks to link behaviours with outcomes by stressing consequences. Coming from Scotland I am hardly in a position to lecture any culture on its attitude to alcohol.

But for a country which prides itself on a healthy, outdoors, quality of life culture the kiwi statistics are interesting. Remember our population is just over 4 million - which makes some of these figures quite stark.

88 percent of men and 83 percent of women are happy to claim that they are drinkers.

Nearly half the population thinks that it is okay to get drunk.

25 percent of current teenage drinkers admit to having drunk at least five glasses of alcohol
at least once in the last two weeks.

125,000 teenagers under the age of 17 fall into the category of binge drinkers. 75,000 will
drink regularly – once every two weeks – and binge. 50,000 drink at least once a week and
binge, usually with the intention of getting drunk.

1.2 million drinkers are okay with bingeing or accepting of bingeing and regularly do so.

450,000 of us were binge drinking on our last drinking occasion.

In New Zealand we estimate that alcohol harm costs somewhere between $1 billion and $4
billion a year.

Alcohol is responsible for 70 percent of accident and emergency hospital admissions.
75 to 90 percent of weekend crime is attributable to alcohol.
One in four women can’t remember what they did while drinking.

The advertisements aim to get New Zealanders to see the connection between getting drunk and the harms that result.
"It's not the fact that we drink that's the problem; the problem is how we drink, that is, the excessive per occasion consumption," says ALAC Chief Executive Officer Dr Mike MacAvoy. "The first step to change is to get people to link that pattern with harms, and at the moment many don't recognise that connection. We're not likely to get behaviour change if no-one thinks it's their problem. So that is what our advertising campaign will do at first.

"New Zealand is a nation that seems to pride itself on the 'save it up for Friday night' style of drinking, the 'we deserve a drink' perspective or consider 'it's a rite of passage that causes little harm'.

Why are we drinking so much? Why are we so accepting of teenagers and students abuse of alcohol?
What is complicated too is working out what is cause and what is effect. If we are serious about addressing the issue we need to be tough on the things which drive people to drink, like poverty and unemployment.

Perhaps after all that - you feel you need a drink.
Posted by Nigel Pollock at 5:51 AM No comments:

My Life is Lost 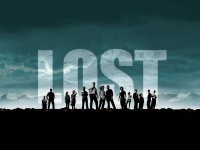 I live on an island. The majority of people on this island were unknown to me before the plane brought us here. There is much that is hard to understand in this world: What is the nature of the opposition? What is the meaning of the messages? How do we make sense of our experiences?

This much I have in common with the characters in "Lost". Admittedly there are some significant differences.I have not had to cope with polar bears, hide from "the others" or press buttons down the hatch.

The genius of "Lost" is that it draws you into a mystery. We are moving towards the Series 2 conclusion in NZ and there is much that is unresolved. I guess the writers may know where it is heading. I presume they had a plan to end it plausibly at the end of Series 1 if the ratings bombed. Actually I doubt if the final denouement will be satisfying but answers is not really what "Lost" is about.

"Lost" is about a journey, it concerns the relationship of characters with complex pasts into which we are granted unique insights. Each of the main characters has a story. There is no single hero and no one leader.

One of the interesting dynamics is between Locke and Jack. I heard a sermon recently in the US which tied together two quotes highlighting their relationship.

From Exodus 2 in Series 1

LOCKE: I believe that I was tested.

LOCKE: Yeah. Tested. I think that's why you and I don't see eye to eye sometimes, Jack. Because you're a man of science.

JACK: Yeah. And what does that make you?

JACK: Brought here. And who brought us here, John?

LOCKE: The island. The island brought us here. This is no ordinary place. You've seen that. I know you have. The island chose you, too, Jack. It's destiny.

and from Orientation in Series 2

JACK: No. It's not real. Look, you want to push the button, you do it yourself.

LOCKE: If it's not real, then what are you doing here, Jack? Why did you come back? Why do you find it so hard to believe?

JACK: Why do you find it so easy?

LOCKE: It's never been easy!

The point being made was that the way of faith is not easy but that faced with the evidence there is no real alternative.

Interesting as that thought is - it misses much of what "Lost" has to say.

As I learn to live on this island, not the Lost island but Aotearoa, I need to appreciate what makes my fellow travellers who they are, listen to the questions, issues and challenges which arise from the context and communicate honestly out of experience. Yes there is hope, yes there is rescue and yes there is One who seeks and saves. But to tell that story well...

I need to learn again what it means to be lost.
Posted by Nigel Pollock at 2:32 AM No comments: