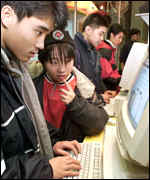 Zhejiang University, a prestigious Chinese University has advised first year students not to use laptops to stop them wasting study time surfing. Mr Cheng Yi, director of recruitment said increasing numbers of students were becoming addicted to the internet. Between September 05 and July 06 two thirds of the 90 students who dropped out of the university did so because of internet addiction.

The newspaper reported a student named Sun "The intention is good but have they realised that we could just as easily hang out in Internet bars for the whole night?"

Sun, on the basis of this brief quote, does not appear to countenance a life which does not involve 12 hours of internet usage a day! He probably only surfs to be sociable.
Posted by Nigel Pollock at 2:35 AM No comments: