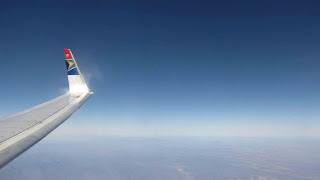 Flying from Perth to Jo’burg I found myself sitting next to a young South African graduate who had been at a conference in Canberra. After some lengthy discussion around the World Cup and the future of soccer in Africa we moved on to talk of other things. He was interested to hear about the conference I was going to and how Christians were responding to the big issues. In particular our response to climate change, trade policy, poverty and aids and how we related to people of other faiths. He described himself as believing in God and he was absolutely clear that spirituality was key in people respecting and understanding humanity. His view was that the way that a scientific worldview has been embraced in the west has diminished those cultures value of humanity. He was reading a couple of books on poverty and was an impressive guy looking at a career in public service. Two things were plain from this plane conversation.

The first was that he would not take anything seriously, which did not have an authentic passion for the world and a concern for people at its heart. I want to say that I believe that the Bible is clear that loving God and loving our neighbour go hand in hand and that right theology leads to compassionate engagement but I realise that I know many Christians for whom this is simply not the case.

The second was that although he regarded himself as being spiritual he did not want to be aligned with any particular faith position. This was largely driven by a desire to avoid guilt by association. It was not interested in engaging with the truth claims of the relative options because he did not want to have to accept the moral guilt and hypocrisy of all religious traditions. He was happy to go to a church if he wanted to but would be very uncomfortable being labelled as a Christian. "I have had some discussions with Christians but they tend not to listen. Their religion closes their minds and their hearts"
Sitting beside this bright young man who had considered and dismissed any value in Christian faith I realised that he had never explored or encountered Jesus.

“What is the purpose of this Congress on World Evangelisation?” he asked near the end of our conversation. I guess it is that we might be better representatives of Christ on earth so that people like you will see something in our lives which draws you in to want to explore more about Jesus for themselves.

I am left wondering about the things I value and the way we live our lives.
Posted by Nigel Pollock at 7:53 PM 3 comments: