The Flotilla and The Fleet 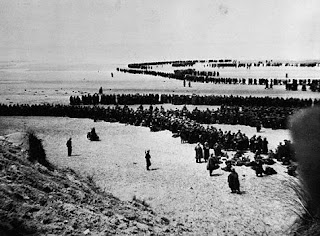 May 1940 was a pivotal point in the history of the world. The German army had swept through northern Europe and the British and French armies were in, what I believe the technical historical term is, ‘deep doo-doo’. The Royal Navy had too few ships available to evacuate the troops stranded on the beaches of Dunkirk. Those ships that were in the vicinity were unable to manoeuvre close enough to the shore to affect a rescue. As the enemy forces lay poised to deliver the final blow an audacious plan was hatched which was to critically alter the course of history. 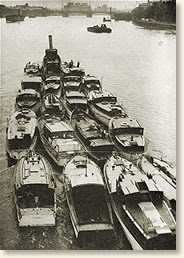 The plan was called Operation Dynamo. It called on anyone with a small, seaworthy craft to come and help. A flotilla of over eight hundred little ships assembled: fishing boats, pleasure crafts and lifeboats. Some of these craft ferried soldiers from the shore to the bigger ships, some took men directly back to England. They were not designed for war, but in the hands of those who knew them and could handle them, they played a vital part in the battle.
The grave plight of the troops led King George VI to call for an unprecedented week of prayer. Throughout the country, people prayed for a miraculous delivery. The initial objective was to recue 45,000 men in two days. Over the next nine days 338,226 soldiers were rescued by the hastily assembled fleet of little vessels and only 40,000 were left behind, dead or captured. Over two hundred of the ships were sunk and a similar number damaged . 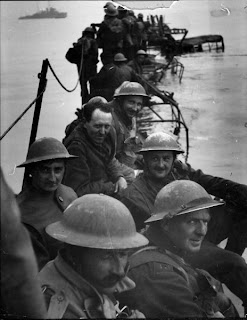 One contemporary account of the evacuation wrote:
"It was the queerest, most nondescript flotilla that ever was, and it was manned by every kind of Englishman, never more than two men, often only one, to each small boat. There were bankers and dentists, taxi drivers and yachtsmen, longshoremen, boys, engineers, fishermen and civil servants. . .
Even before it was fully dark we had picked up the glow of the Dunkirk flames, and now we could see silhouetted the shapes of other ships, of boats coming home already loaded, and of low dark shadows that might be enemy motor torpedo boats. The beach, black with men, illumined by the fires, seemed a perfect target, but no doubt the thick clouds of smoke were a useful screen.” 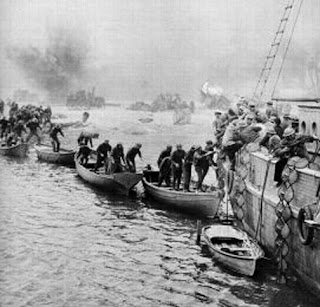 What we see in the Dunkirk Spirit is a fleet of small vessels, not at all uniform in design or ordered in their command structure. They have a clear sense of vision and they participate at great personal risk because they understand what is going on and what they can contribute. This flotilla works together and collaborates where possible with the Naval Fleet. It is a messy business, slightly chaotic and not that well thought through but it turns the tide of history.
I believe that we live at a point in time where there are millions stranded on the ‘beaches’. We need a new paradigm of mission where there is a new sense of urgency on reaching and rescuing the lost. We need a new strategy to connect with those stranded from the conventional approaches. I believe that what we are beginning to see in New Zealand and around the world is a flotilla of small craft mobilized. More responsive, less uniform, better able to take initiative and get in closer to the shore. This rag tag flotilla can be confusing to those who man the bridges of the big destroyers. It is the navy, but not as they have known it. The difficulty is that many in the Naval Fleet see the Flotilla of small ships as an unnecessary distraction, self absorbed and deflecting resource from their battle plans, whereas many in the Flotilla find the Fleet, inflexible, hierarchical and disconnected from reality. In Operation Dynamo they work together. The key thing to grasp is that the fleet and the flotilla all sail under the ensign of the King.

The St George's Cross flown from the jack staff is known as the Dunkirk jack, and is only flown by civilian ships and boats of all sizes which took part in the Dunkirk rescue operation in 1940. The only other ships permitted to fly this flag at the bow are those with an Admiral of the Fleet on board. The smallest of the flotilla, the 15 ft fishing boat “Tamzine” is on display in the Imperial War Museum in London. Little boats given a status and a place of honour because they served the King. 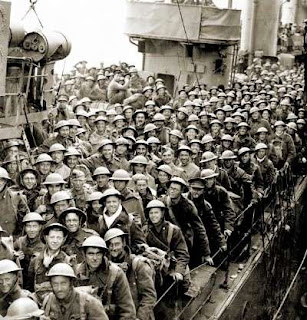 I believe we need to see ore inter-generational cooperation, I believe we need to see a recognition from the Fleet of their limitations in the current crisis, i believe the Flotilla needs to collaborate more, to put aside personal agendas and to be less cynical about the Fleet. But as I write I see the smoke of battle smudging the horizon, listen to the sound of the guns and am aware of all those we are not reaching. I long to see urgent prayer for the lost becoming a feature of the year ahead and in particular to pray for a new generation of influence and service to be raised up - who sees things... differently. 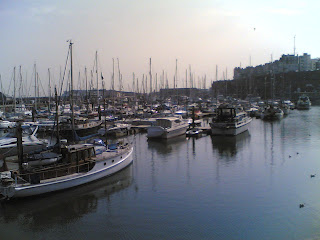 Above all I want to see more little ships on the high sea joining the rescue flotilla. Crewed by people giving what they have, who are willing to hazard all for the sake of rescuing some. If you would like to talk about how you can partner with us in prayer, finance or service do get in touch with me. If you want to join the adventure of meeting the challenge of this generation in the company of friends - come. You wont find me at the Captain’s table or on the bridge of a flagship, I’m in the battered dinghy that’s leaking a bit but trying to press on through the wash. Join us.
Posted by Nigel Pollock at 6:39 AM 7 comments: