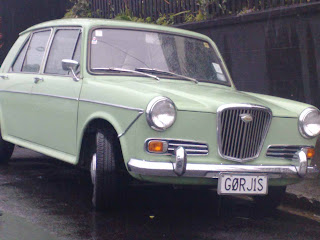 I am always on the look out for gorgeous things. There is always so much to see and do and the number plate definitely works better in a Glaswegian accent. A number plate can make you look a second time at an old car and see that it is somebody's passion. Gorgeous things for me are things that inspire a second look and make me gasp, laugh, think, smile or cry. 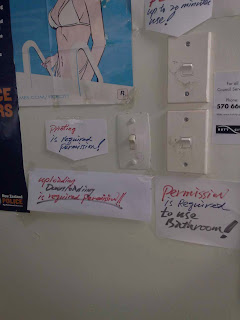 These signs are in the internet cafe in Lower Hutt. Permission seems to be necessary to do just about anything from downloading to using the toilet and before you ask I WOULD rather keep those ideas separate. This is not the way of thinking of your average European descended Kiwi at all but does resonate with Asian and New Zealand born Asian culture. I find it fascinating how divergent attitudes are to things like authority. 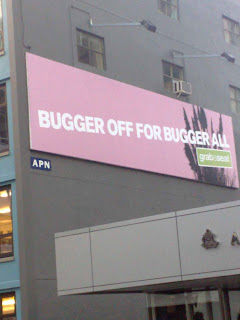 This advert is more typical of Pakeha Kiwi Culture. Language is used in different ways, not always helpfully. Very few Kiwi's would see anything offensive in this billboard. This is Air New Zealand, the national airline, advertising cheap deals. It is just part of the folksy charm of the place! 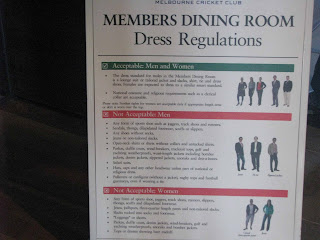 I had thought that Australia was also fairly relaxed in a stubbies and singlet kind of informality so was quite taken aback by the dress code at the Melbourne Cricket Club. The list of what is considered unacceptable is a lot longer than the guidelines for acceptable dress. I rather enjoy that acceptable men and women are grouped together whereas fashion crimes for the unacceptable have to be gender specific. This kind of mentality could be running an internet cafe in Lower Hutt but would have the prohibitions laminated I am sure. 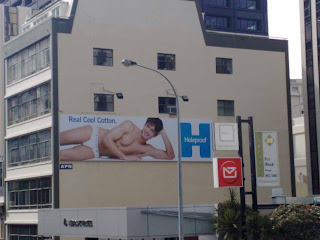 This underwear billboard has a number of interesting elements. And before you ask (NO I don't think he is gorgeous!). The way the picture has been taken putting the male model into a more stereotypical female pose is fairly common now in advertising. The angle of the hips and the curve of the breast intentionally blur the gender. I guess many of us would be positive about androgynous clothing, where we can make choices based on comfort and practicality rather than on what is differentiated by gender. But there is a trend to push a more androgynous culture as a whole where there is a blending of male and female characteristics and a blurring of roles. There is significant confusion about what it means to be male and female which has many implications which stretch far beyond our choice of pants. 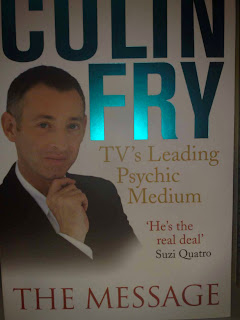 "The Dominion Post", which is the Wellington equivalent of "The Scotsman", (an explanation that I am sure you will find particularly engaging if you live in some part of the world where neither of these august publications is the first choice for the delivery of quality local news with an international perspective.) had a feature recently on the growth of astrology. Graham Ibell quit his job as a biologist with the Department of Conservation. "I was just finding myself becoming more and more disillusioned with science. It didn't nourish me, I was looking for something soul-filled. Science didn't provide that," "I think it's peoples emptiness. People are looking for answers. It's not just enough to go shopping for bathroom taps on a Sunday anymore". Ibell also reflects on the importance of relationships and of intuition. "It just opened me up, I started to see life in more of an interconnected way. We are not all separate individuals; it gives me a spiritual perspective on life." "It requires a great deal of engagement with the imagination . . . a very different way of thinking than scientific thinking." Many of Ibells comments could come from an emergent church leader talking about religion.

More people are turning to astrology during the recession. Kapiti astrologist Gigi Sosnoski has seen a "steady increase" in clients over the last year - from mothers wanting their newborns' charts read to people setting up a business and pensioners looking for love. In times of uncertainty, she says, people need to feel more in control. "People always want to get some clarity regarding their future. Things to look forward to, how they can best plan ahead."

This connection with the spiritual world, with the past and the future is something many are hungry for. If people stop believing the truth, they don't believe nothing - they believe anything. To prove the point I refer you to the book cover above, where somebody clearly believes that the endorsement of Suzi Quatro will help promote their philosophy. (What? you don't think a Christian book would ever carry the endorsement of a minor celebrity in a way that a thinking person would find laughable? - no me neither!) 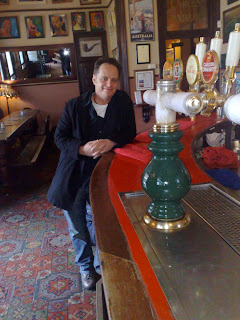 Pete Hughes who is a friend of mine in Sydney, is involved in a new church planting initiative in Ryde. They have decided to call the church Soma. Which is Greek for body but is also the name of the drug in Brave New World which is the opiate of the people. We had spoken about a few alternatives which wee close but different. So on the flight over I knocked together a few alternatives to pitch to him over lunch. (which was good fun and I had seen most of the movies anyway!) 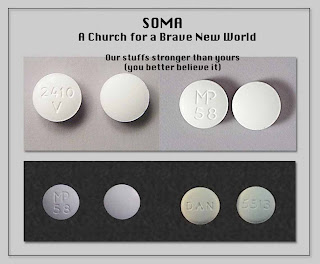 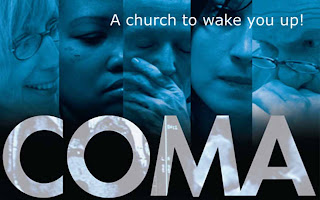 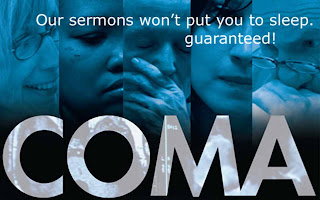 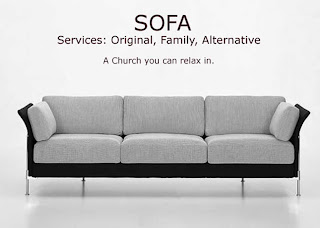 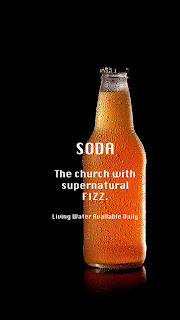 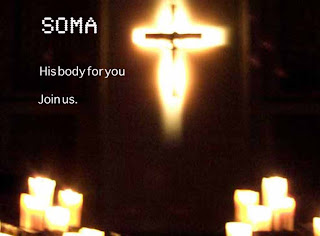 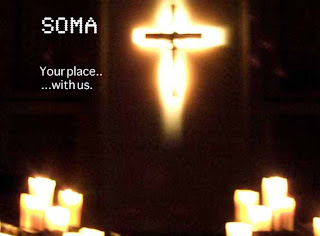 Which on a serious point does pose an interesting question. How do we present who we are and what we do in a way that engages the imagination and interest of the people around us. How do we get beyond stereotype that many have of church in the western world and help people to see that here is someone life changing and something authentic which is to quote Suzi "The real deal". We don't have to do it perfectly but if we could it better it would be gorgeous.
Posted by Nigel Pollock at 3:39 AM 4 comments: